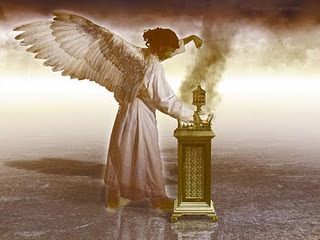 A revelation recently came to me, one that I suppose I should known for a long while. It was simply this: our prayers are truly precious to God. I know… duh! I just had never thought of my prayers as a precious commodity.

What makes the act of praying an amazing thing is that no man would ever even consider speaking to God unless he had some foreknowledge of God and who He is, and according to Christ that doesn’t happen merely by chance.

Anyway, I have been listening to sermons, and reading/studying about the “end times”. In Revelation the prayers of the saints are likened to a fragrant aroma to God. In Revelation 5, John is describing his revelation of heaven and the throne room. Verse 8 says,

“When He (Jesus, the Lion, the Root of David) had taken the book, the four living creatures and the twenty-four elders fell down before the Lamb, each one holding a harp and golden bowls full of incense, which are the prayers of the saints.”

I’m sure I had read that many times, but for some reason it struck me deeply this time. I know Christians pray to give thanks to God and make petitions of Him, but I never considered those prayers as precious or valuable to God.

Later in Chapter 7 the Lambs breaks of 7th seal, which sealed the book He had received from Him who sits on the throne. Verses 2 through 5 say,

“And I saw the seven angels who stand before God, and seven trumpets were given to them. Another angel came and stood at the altar, holding a golden censer; and much incense was given to him, so that he might add it to the prayers of the saints on the golden altar which was before the throne. And the smoke of the incense, with the prayers of the saints, went up before God out of the angel’s hand. Then the angel took the censer and filled it with the fire of the altar, and threw it to the earth; and there followed peals of thunder and sounds and flashes of lightning and an earthquake.”

I’m no theologian , but if the prayers of the saints are suitable for weaponry for God, it must mean they carry much power and are truly holy. Amazing. I searched and read further found a great dissertation written by J. R. Miller, written in 1988. It was entitled The Sweet Fragrance of Prayer.

There he explains the true value and power of prayer, and how precious it is to God. Here’s the link; it’s definitely worth a read: Sweet Fragrance of Prayer.

Long story short – I have a new perspective and appreciation for prayer. To God they are precious. He saves and treasures each one; rightly prayed from a contrite heart, they are a fragrant aroma. It’s given me new power to pray. Knowing that God treasures my prayers has given me new boldness to pray, to ask for forgiveness and help from the Spirit. I feel a bit closer to Him. That’s good, for according to the holy scriptures the closer I get to God, the farther Satan will flee from me.

Now that is Good News Only.