Here is the final solution for a trailer for my recumbent bike packing adventures which will take place this spring and summer. The kit is well designed and sturdy and affords all necessary hardware to complete the trailer one desires. Additional wood, aluminum, and some screws are provided by the purchaser.

This trailer will be used to carry my “power box” which will help sustain my electrical needs on the trip. Enjoy.

Like some may have been doing, I’ve been watching the news, considering the state of our country in general and the state of the world, and trying not to be overcome with fear, anger, and disgust.

It’s difficult to watch our country go in the direction to seems it is headed. Free speech is threatened, our political and educational systems are in chaos, people are afraid and unsure of what to do or say. God forbid one goes to jail for using the “wrong pronoun” to address a fellow citizen.

On the radio today (Christian/Praise station) I heard a simple statement that really struck a chord in my heart,

How simple a revelation. I am going to do just that. I worry too much. I worry about my own salvation; my sins are ever before me, the Accuser always making sure I don’t forget the utter evil I have committed. I wonder how or why God still loves me. I worry about the political life of our country. I worry about wealth, health, family, and more. But worry is fear and when you love God and are loved by Him you cannot let fear rule. I John 4:18 says,

There is no fear in love; but perfect love casts out fear, because fear involves punishment, and the one who fears is not perfected in love.

So let us cast our fear and replace it with faith. Faith, which is able to guard our souls until the day of revelation comes. God is in control. No matter how many rail against the truth, the promises of God will come to fruition. Christ Jesus will reign as King of Kings and Lord of Lords. All those who name the name of Christ must not forget this. Pray more, worry less. Amen!

I woke up early this morning, 5:10 exactly. Laying on my right side, my brain raced off to attend to the important concerns of the coming day. Obviously, it had decided I had accomplished enough sleeping for one night. Slowly my gazed raised and eventually focused through the glass of the window which is near our bed. The stars brightly shown through the space above the lowered top of the pleated blinds. Their brightness startled me.

I raised up onto my right elbow and looked again. Sure, I have seen the night sky before, but was it really that bright? I just didn’t remember ever seeing it as such in a long time. Soon I was at the window, standing in amazement, looking at Orion as if I had never seen him before. He hung hugely over the mountain tops of the Olympic National Forest. I could not believe it. Every star was turned up a notch. Maybe because my eyes were adjusted to night vision I could see them all better. Whatever the reason, I quickly dressed and raced out to the front porch. The sky was magnificent.

It drew me out even further into the front yard, to the driveway in front of the garage. The Big Dipper was hung just above the tree tops in the west. I found the North Star. It was like I could see every star God had ever created. The Milky Way I could literally see, the haze of its soft light glowing in the back ground. The entire canopy of the universe was on display, and here was I the only spec that God had bothered to create in the image of Himself. As I stood transfixed I remembered His word in Psalms 147:1-6

Praise the Lord!
For it is good to sing praises to our God;
For it is pleasant and praise is becoming.
The Lord builds up Jerusalem;
He gathers the outcasts of Israel.
He heals the brokenhearted,
And binds up their wounds.
He counts the number of the stars;
He gives names to all of them.
Great is our Lord, and abundant in strength;
His understanding is infinite.
The Lord supports the afflicted;
He brings down the wicked to the ground.

Indeed! Every star is named by Him? How many stars are there in the universe? Only He knows that number. Only He could even imagine it. All praise and glory belong to God. I’m so glad He is in control of the universe and this planet we call home. In the light of the nonsense of the upcoming presidential election I struggle to remain positive. Daily the news brings an accounting of just how badly we are treating each other, not only in this country, but around the world. However, in the second chapter of the book of Daniel it says:

Let the name of God be blessed forever and ever,
For wisdom and power belong to Him.
And it is He who changes the times and the epochs;
He removes kings and establishes kings;
He gives wisdom to wise men,
And knowledge to men of understanding.

As God has placed every star in the heavens, on purpose, with design, so does He have ultimate control of what will eventually transpire on this sad Earth of ours. We have turned away from Him, and our society is really starting to show the effects of that decision. A leader who seeks righteousness is a rare thing. It honestly scares me when I think about where we are headed and what’s coming upon the Earth in time. I think I needed to see that sky this morning to remind me who is really in control. As it says later in the same book of Psalms:

He does not delight in the strength of the horse;
He does not take pleasure in the legs of a man.
The Lord favors those who fear Him,
Those who wait for His lovingkindness.

His starry display reminded of my purpose, to wait for His lovingkindness, in hope, and in as much faith and fearlessness as I can muster. What else can I do? Answer: nothing. Thank you God for your beautiful sky this morning, and thank you that you created me with the ability to enjoy it and be awe-inspired by Your power, love and glory.

Just finished this one this afternoon. I don’t think I’ve ver painted a watercolor this small; it’s only 5×7 inches big. It’s painted on hot-press art board, which was very different from painting on stretched water color paper. The bottom image is the finished painting. The first three show a bit of the process. I made sure I painted to fit the frame size, so this one is framed already with a fifty-cent frame I found at a local swap meet. Enjoy! 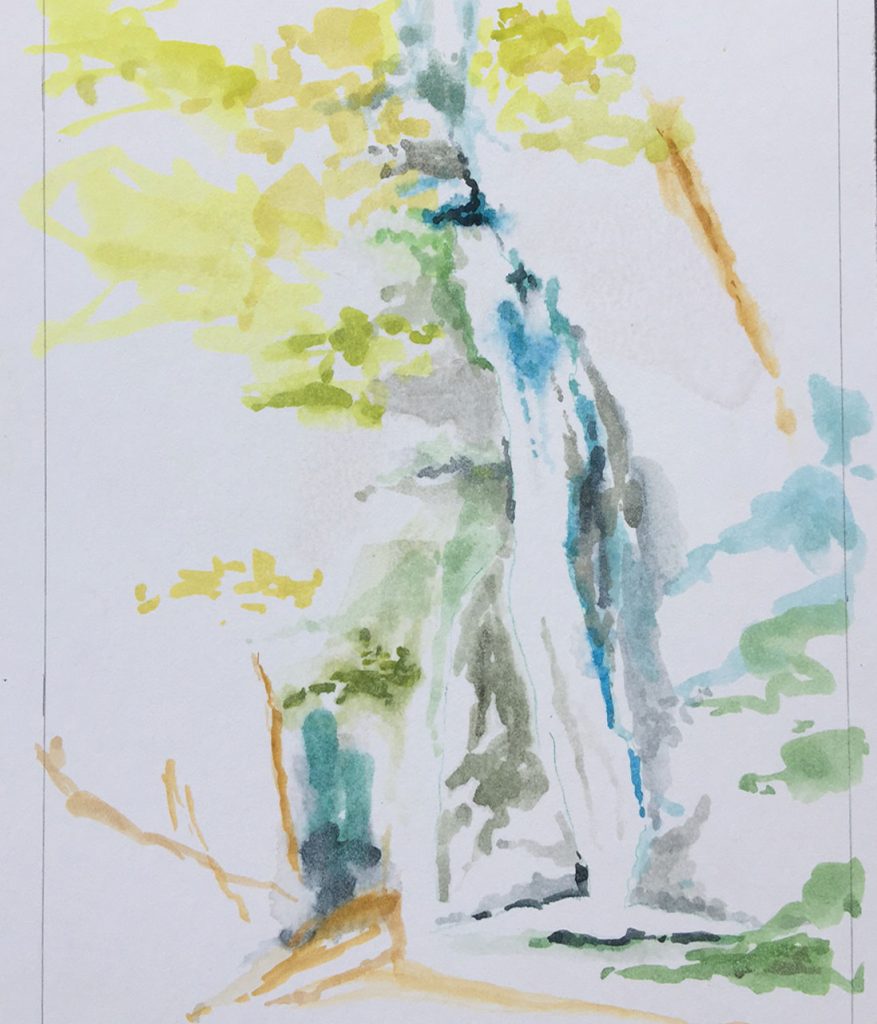 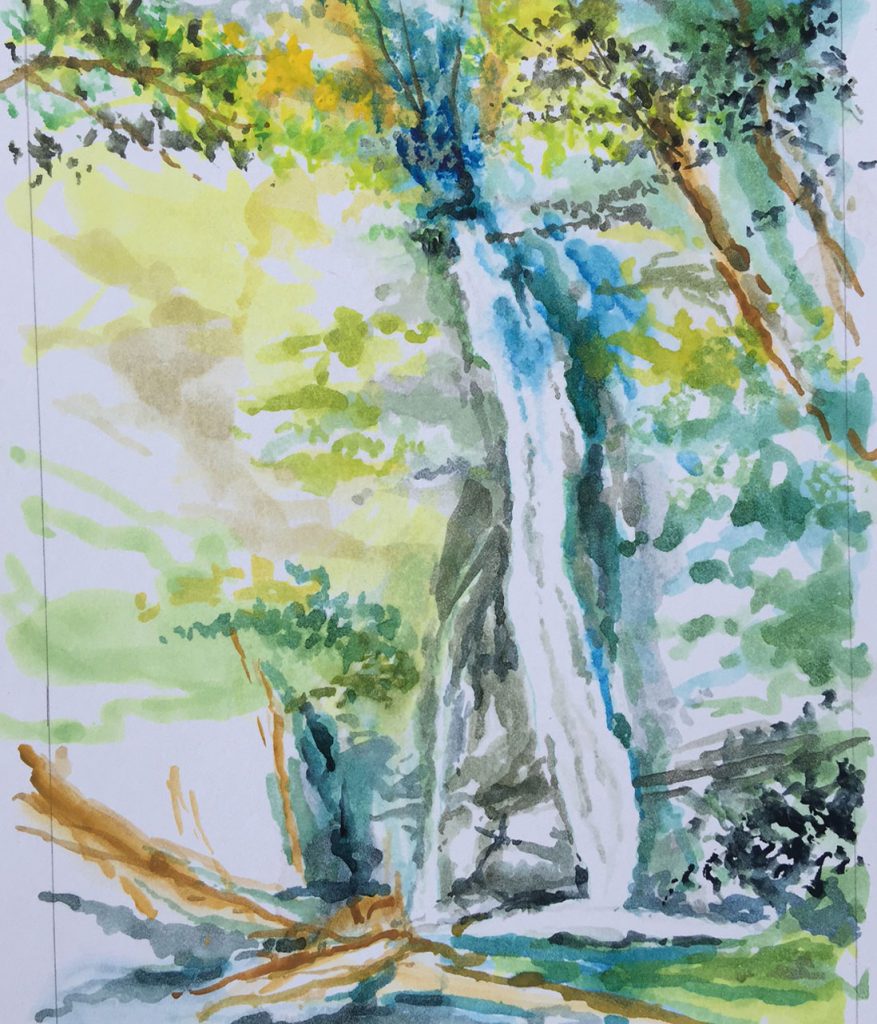 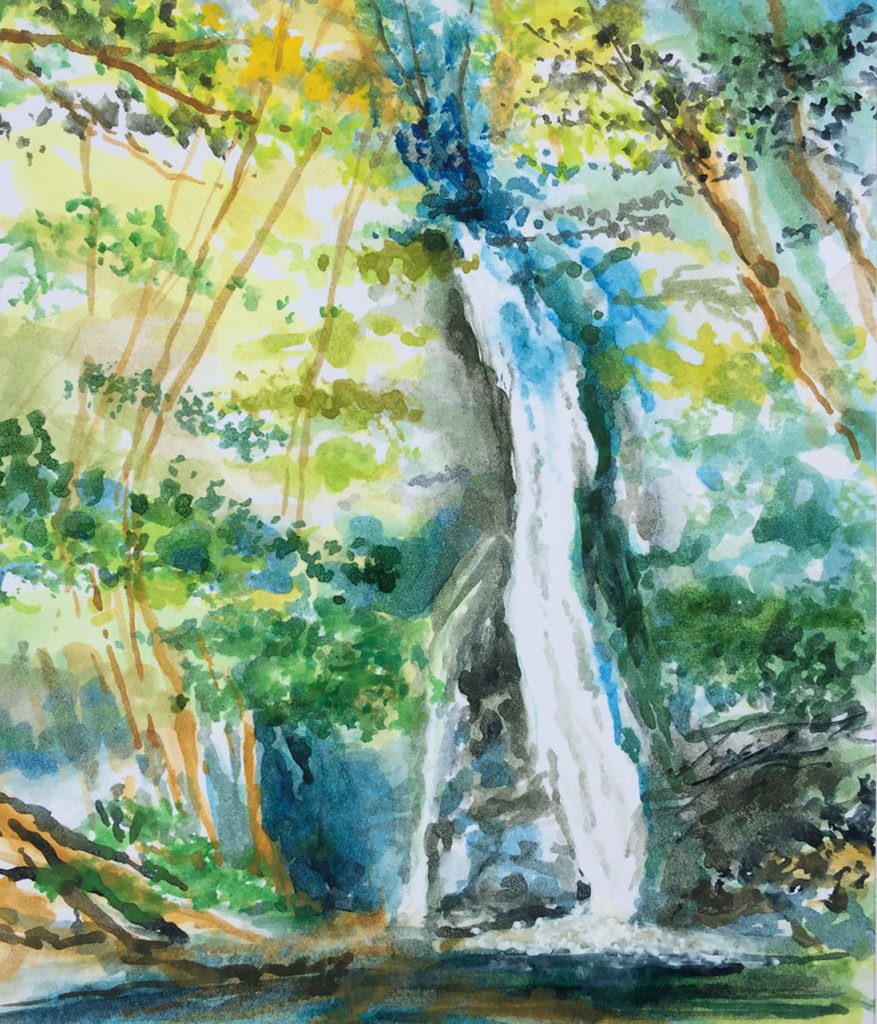 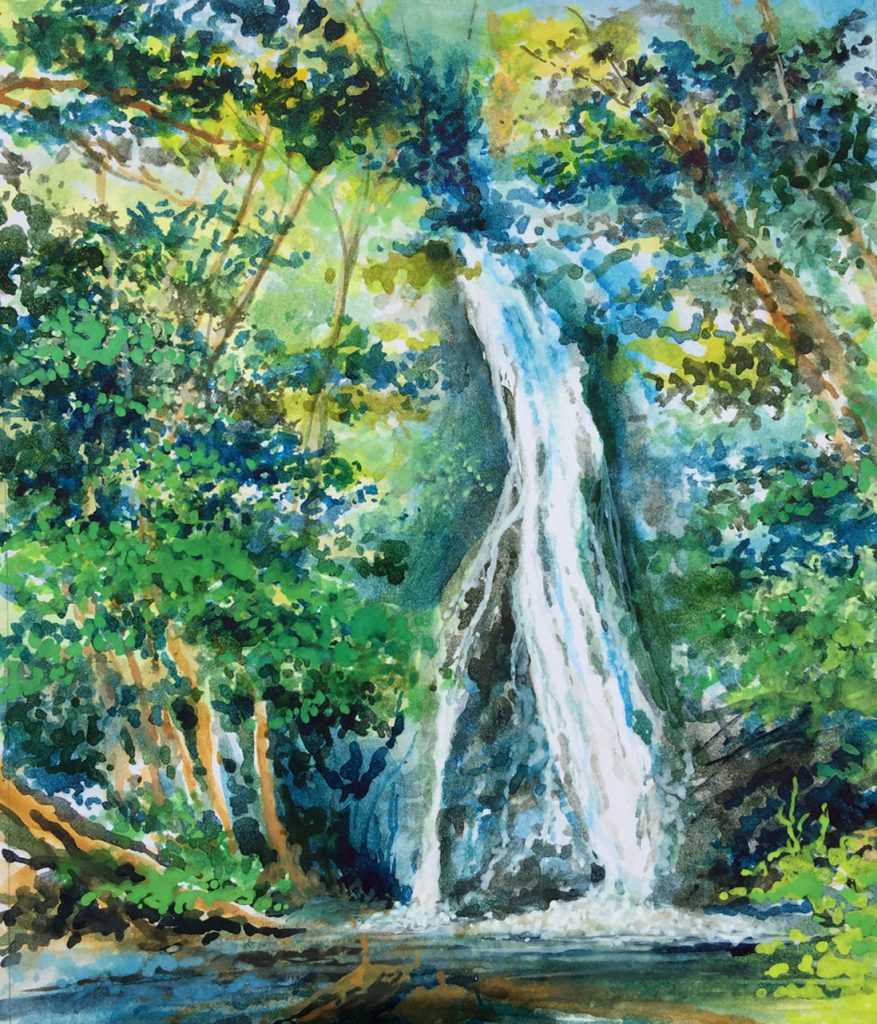 Hi, Guys. There’s a really cool, neat little place right on Highway 101, heading toward Forks called Granny’s Cafe. The tiny restaurant is on about 3 to 5 acres. The food is really good and the service is great and friendly. Out back there is all kinds of wonderful funky stuff to see. There’s a donkey with white bangs over his eyes, and fat goat that comes right up to the fence to say hello. Also there is a well, which is the subject of my latest water color. 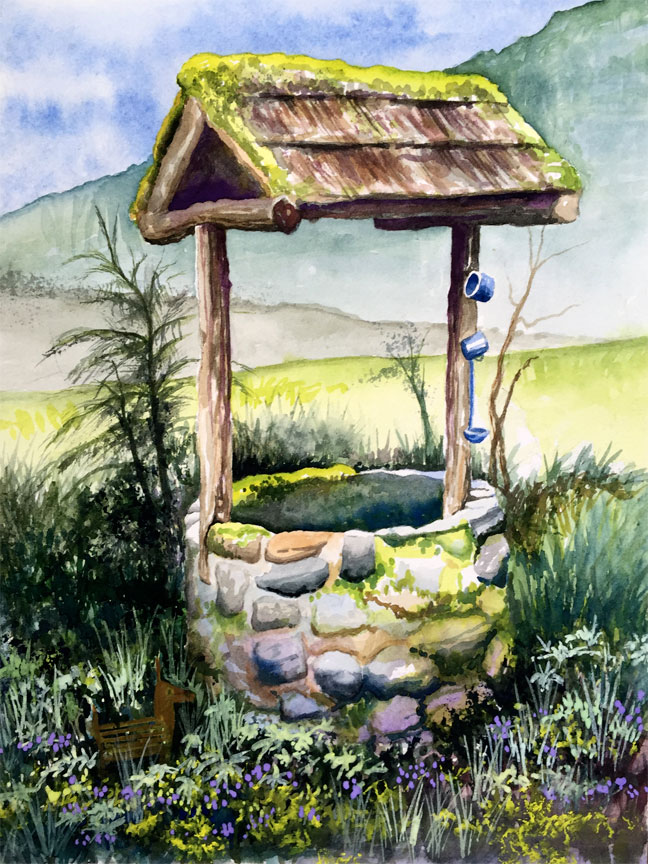 Below is a gallery showing the entire painting from start to finish. I must say, I’m a bit rusty, but I’ll be onto the next painting very soon. Anyway, if you are out west of Port Angeles, stop in at Granny’s Cafe. You won’t be disappointed.

My hope is built on nothing less than Jesus blood and righteousness.
I dare not trust the sweetest frame, but wholly lean on Jesus name.
On Christ the solid rock I stand; all other ground is sinking sand. 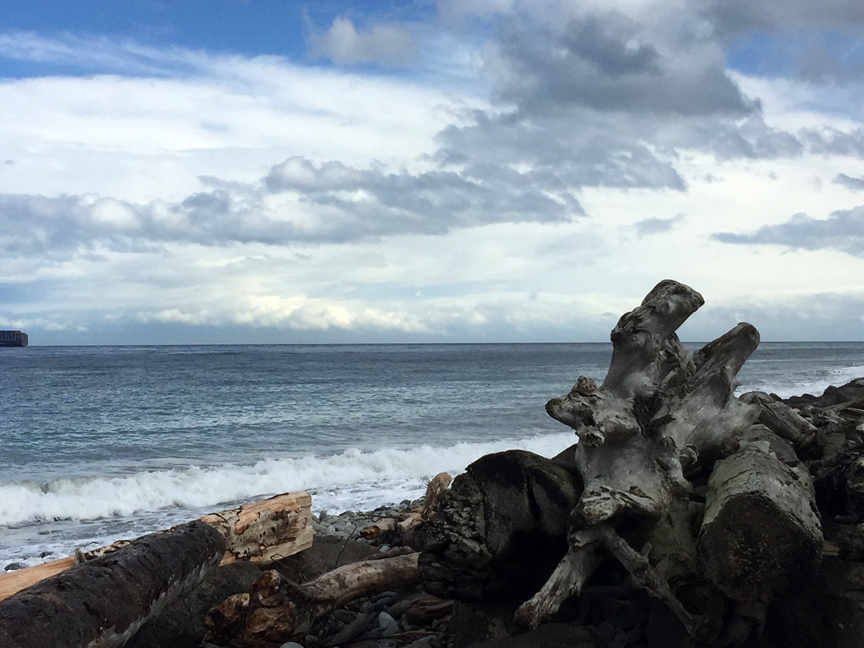 Recently, my wife and I went out to a beautiful place here in Washington called Edis Hook. It’s a narrow strip of sand and rock that extends miles out into the ocean. Out there the sky is huge and beautiful. Sunsets are spectacular. The drift wood is amazing. In order to get to the actual water, you must traverse a wall of huge jagged boulders. Most are wet and slippery; some are not as immovable as they seem. Some, on the other hand, are solid and perfect for the journey to the other side.

Christ is like one those perfect, solid rocks – always there, always secure – guaranteed to keep your foot from slipping. When I meditate on what Christ has done for me, His steadfastness is often the trait that amazes me the most. He lived His entire life in complete faithfulness to His Father, without faltering. It’s the one trait I wish I could muster to the extent that He did.

I can totally relate to the Apostle Paul when he said in Romans 7:23-25:

…but I see a different law in the members of my body, waging war against the law of my mind and making me a prisoner of the law of sin which is in my members. Wretched man that I am! Who will set me free from the body of this death? Thanks be to God through Jesus Christ our Lord! So then, on the one hand I myself with my mind am serving the law of God, but on the other, with my flesh the law of sin.

It’s often a depressing struggle as I try to be “good”, knowing that will I never achieve that goal, doing dumb stuff even when I don’t want to. Sometimes when I think of my life, I wonder how God can actually still love me as much as He says He does. Amazing!

Thank God all I have to do is rely on the completed work of the Rock, Jesus Christ! By trusting that His death and resurrection have sufficed to pay in full the wrath due me, I gain power to rely on Him. I may not ever be as good as I hope for in this life, but at least the Father sees me dressed in the righteousness of my Savior. Whew!

If you pray sometimes, send one up for me; that I can increasingly grow more faithful and run a good race all the way to the end. Truly, I want to hear Him say, “Well done, good and faithful servant. Welcome into the joy of your Master.”

Now that would be Good News Only.